Google, YouTube Editor is useful. Make it stick around a bit longer #SoLongYouTubeEditor 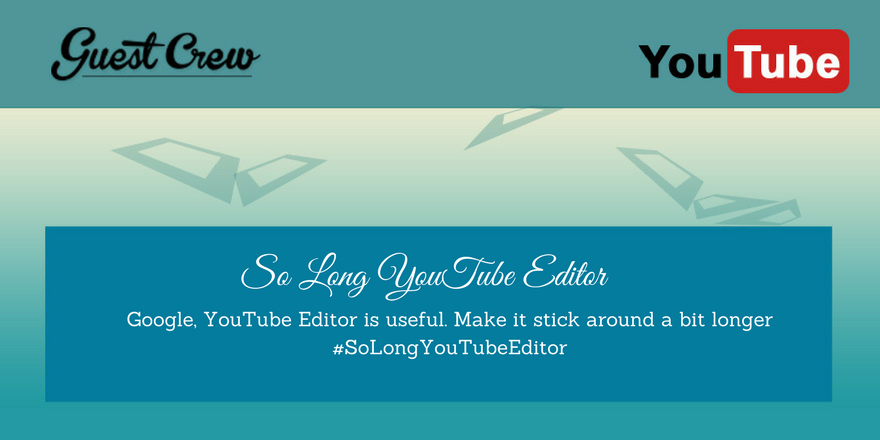 YouTube has decided YouTube Editor has gone the way of the dinosaurs. The media website is quietly retiring the editor software, much to the dismay of those who actually used it. While we’re sure YouTube has its own reasons for shutting down such a useful piece of software, for many YouTube users, the editor software is - was - tremendously helpful.

Was the YouTube Editor the most amazing piece of video editing software ever known to man? Nope. Was it even close to an Adobe product? Not really. But should it go away? Definitely not. YouTube has millions of users world-wide and not all of them have access to, can afford or even want to mess with the complex video editing software that the purist prefer.

But for those millions of users who are making simple videos for their own entertainment or marketing purposes, YouTube Editor had everything they needed - it was clean, easy to understand and got the job done.

And for many of us, that’s all we asked for from an editor.

YouTube has made the decision to retire its Editor on September 20 of this year. That doesn’t give us much time to finish up any of our last minute projects, get them cleaned up and posted and then say a proper good-bye.

Will we stop posting videos or stop editing them because we’ve lost a favorite piece of straight-forward software? Probably not. YouTube is too valuable a source for marketing and entertainment purposes. Will we gnash our teeth and roll our eyes as we figure out how to use one of the many other video editors out there? Almost assuredly.

We won’t pretend it’s the end of the world as we know it. We don’t claim that we can’t get by without YouTube Editor.

We are simply saying that no matter what anyone else says (and we’re looking at you, Google), YouTube Editor was useful. We liked it. Many of you liked it. And we wish it would stick around a bit longer.

Hey, am Uttoran Sen, the CEO and Co-Founder of GuestCrew. We are running this campaign because we liked the Youtube Editor. Many of you liked it. And we wish it would stick around a bit longer #RIPYouTubeEditor

Google, YouTube Editor is useful. Make it stick around a bit longer #SoLongYouTubeEditor