Kickstarter Giveaway #Ferrofluid - A Symbol of the Future. Take Part in Future Technology. 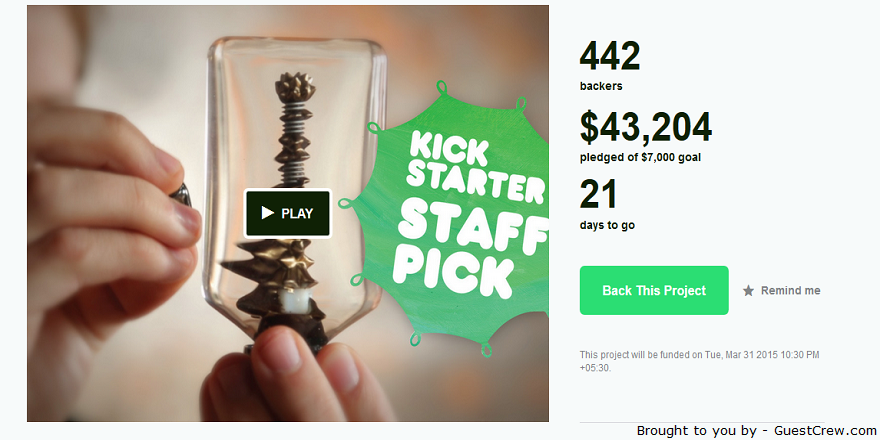 Presenting - Ferrofluid - that is magnetic and yet liquid at the same time!

From Wikipedia: Ferrofluids are composed of nanoscale particles (diameter usually 10 nanometers or less) of magnetite, hematite or some other compound containing iron.

How Does Ferrofluid work?

As you can see, ferrofluid is a magnetic liquid.

This is something special because all known magnetic materials lose their magnetization when they get too hot. And this always happens long before the material reaches it's melting point. The trick is to suspend tiny pieces of solid magnetic material in the liquid.

Normally, solid particles mixed in a liquid will eventually settle to the bottom because of gravity. Much like mixing sand in water. But, if the particles are small enough (say 10 nm) they won't be pulled down by gravity. This is because of a force called Brownian Motion.

Brownian Motion is the tendency of liquid molecules to be constantly moving around. As a result, they bombard other particles in the liquid. And when the particles are very small in size this force is strong enough to counteract the force of gravity.

So, here is the Interesting part - We are giving away 1 "The Thinker" with the color option - to the winner of this Giveaway.

Taking part in this contest is very straightforeowrd. If you have taken part in any of the previous contests on Guest Crew - you already know the rules.

Step 1 - Make sure you are Registered and Logged-in to Guest Crew. If you aren't logged-in we can't look up your entry and you will be disqualified from the contest.

This is the most important step - Once you have supported the campaign - send me a Private Message on Guest Crew and let me know which Social Account (Facebook, Twitter etc.) you used to support the campaign.

Once you are all done - just enter RaffleCopter below and add your entry:

thank you for taking part in this contest,

Do Support the Campaign on Kickstarter

I have a certificate in Nanofabrication Manufacturing Technology from Penn State University. I'm an avid experimentalist and am drawn to innovation. I've found ferrofluid to be a great medium for me to fine tune these interests. I have been experimenting with ferrofluid full time for almost 3 years.

Kickstarter Giveaway #Ferrofluid - A Symbol of the Future. Take Part in Future Technology.