Please Retweet - Ebola Is Only the Beginning. Spread the awareness #WorldHealthDay thanks, 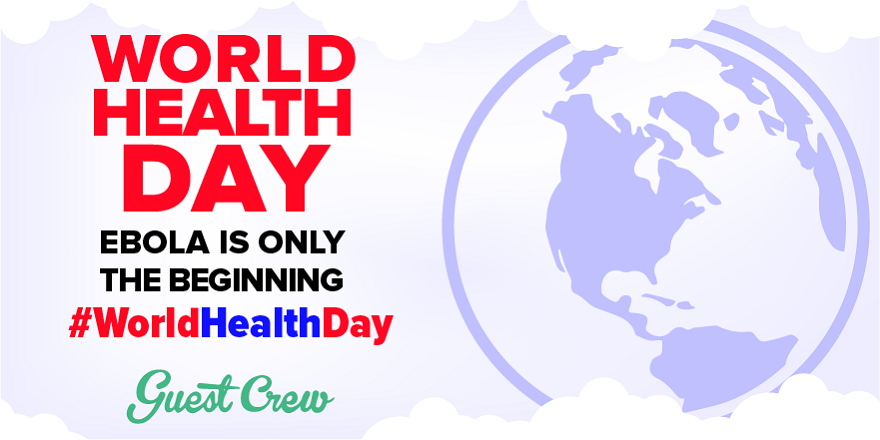 A month or two ago, the world watched as Ebola spread across the globe.

Today we watch as measles - a disease we all but wiped out decades ago - roars back to life with a vengeance.

For many of us basic health is something we take for granted.

Most of the developed world lives in a cocoon of comfort. Our biggest diseases now spring from our creature comforts. Diabetes. Heart disease. High blood pressure.

But the rest of the world doesn’t live the way we do. They don’t fight to keep from putting tasty morsels in their mouths or agonize over how to handle the multiple life-saving vaccines required for our children today.

They often don’t have safe drinking water, much less ready access to MRI machines and antibiotics.

But there is much we can do to help.

For Americans the recent outbreak of measles at Disneyland is shocking. It’s even more shocking that the disease is spreading so quickly through a population who should be vaccinated against it. In other parts of the world, however, measles isn’t shocking. It’s something populations have been dealing with for centuries.

The same can be said for Ebola. Or tuberculosis. Diphtheria. Even tetanus.

For some communities, illness and corresponding death and disability isn’t in the ancient past as it is for us. It’s something that happened yesterday. Or perhaps just a few years ago.

Fortunately healthy conditions are spreading across the globe as resources reach developing nations. But while much is done, there are still basic conditions many struggle for.

The two toughest issues for some communities are among the most basic of our human needs – food and water. For some, the water they drink is the same water that they use as a sewer or use for animals. Dirty rivers spread many diseases and unfortunately for many of the world’s poorest families there aren’t many other options available when it comes to drinking water.

Contaminated rivers and lakes. Stagnant well water. There are many potential problems teeming under the surface of every cup or pot of water.

Basic sanitation is a struggle as well. With dirty water, it’s a challenge to really clean or rinse away germs. A dirty body won’t get much cleaner in dirty water after all.

But water isn’t the only problem. Contaminated food can be just as insidious a problem.  Roughly 2 million people die every year from unsafe food conditions – and these deaths are not isolated to developing nations.

Bacteria, viruses, chemicals and parasites can all infiltrate what appears to be a normal looking food item causing everything from diarrhea to cancer.  As food production and distribution becomes increasingly globalized, it’s more important than ever to focus on producing and preparing clean, healthy food items free of dangers.

This year the United Nations is focusing on safe food. Food safety is an issue that affect all of us and for many, the greatest defense against dangerous food conditions is a good offense. From simple steps to complicated world issues, the United Nations is bringing awareness to World Health on April 7. Learn more.

From simple steps to complicated world issues, the United Nations is bringing awareness to World Health on April 7. Support this campaign - by clicking on the Facebook or Twitter button.

Please Retweet - Ebola Is Only the Beginning. Spread the awareness #WorldHealthDay thanks,