We Are Beating AIDS, But We Aren't Done Yet! Promote Awareness for #WorldAIDSDay December 1. 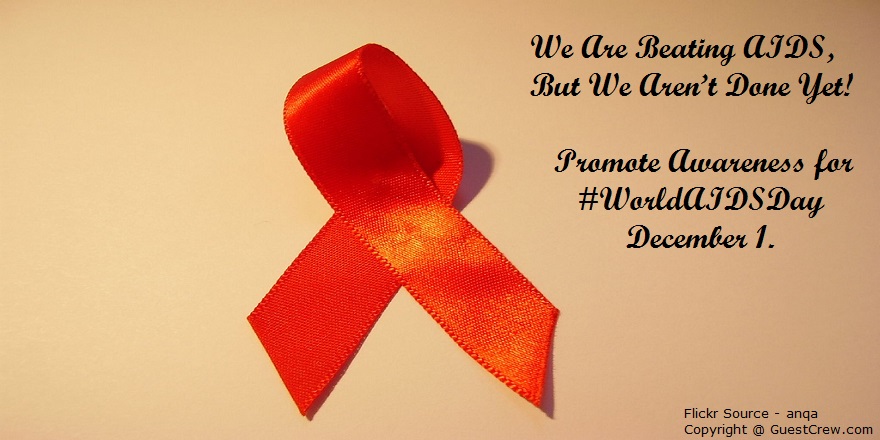 In 1981, AIDS was introduced to America.

By the end of that year thousands of new cases of the fatal disease had been reported and the number was growing.

By 1993, AIDS was the leading cause of death among individuals aged 25 to 44 in the United States.

By 2012, 35 million people world-wide were infected with AIDS.

While that number is sobering, there is good news to celebrate - the rate of infections has decreased dramatically.

Progress in education, needle-exchange programs and childbirth practices have slowed the rate of new infections by 33 percent both in the United States and across the globe.

A person with AIDS today is not handed a death sentence as he was just a generation ago. Today it is possible to live with HIV and AIDS for a long time if you have the right medical treatment available, but it’s much too soon to consider the fight over. With an estimated 2.3 million new cases of AIDS every year, there is still a tremendous amount of progress to be made.

AIDS is spread through an exchange of bodily fluids. The vast majority of new cases occur through sexual contact, sharing of needles and, saddest of all, through childbirth and breastfeeding. Before 1996, contracting AIDS meant dying within a decade.

Medical advances in the first fifteen years of the disease improved antiretroviral therapy, making it easier to live with the disease and extending the lives of AIDS victims for many decades. This medical treatment allows those infected with AIDS to live an almost normal life, but only if they can afford the treatment.

The United Nations recognizes that we have much to celebrate in terms of AIDS, but still have a great deal of progress to make. The UN has named December 1 as World AIDS Day to help highlight the goals we as a global society must embrace to ultimately beat this horrible disease. The World AIDS Day goals for 2015 include:

Halving the sexual transmission of HIV among all populations including young people, gay men and sex-trade workers.

Eliminating the spread of AIDS from mother to child.

Universal access to antiretroviral therapy for those living with HIV

All people living with HIV and their households have access to essential care and support.

At least half of all national HIV responses should address the HIV-specific needs of women and girls.

The UN supports a zero-tolerance position against gender-based violence.

What You Can Do to Help

AIDS is a world-wide epidemic. That can be very daunting to individuals looking for ways to help. After all, what can one person do to help millions? The answer is: a lot. One of the biggest ways to help would be by donating funds to help victims. The United Nations estimates monetary donations to support AIDS relief work will be up to $5 billion (USD) short this year. If you have funds, consider a donation.

But even if you don’t have funds available to donate, you can help spread the word and promote the goals of World Cancer Day. Learn more on the United Nations website for the annual event. We have already made significant progress, but with millions of new HIV infections annually, there is still much to do. Be part of the change.

Uttoran Sen is the CEO and founder of Guest Crew. Help Guest Crew to spread the word about - World AIDS Day - on December 1.

We Are Beating AIDS, But We Aren't Done Yet! Promote Awareness for #WorldAIDSDay December 1.