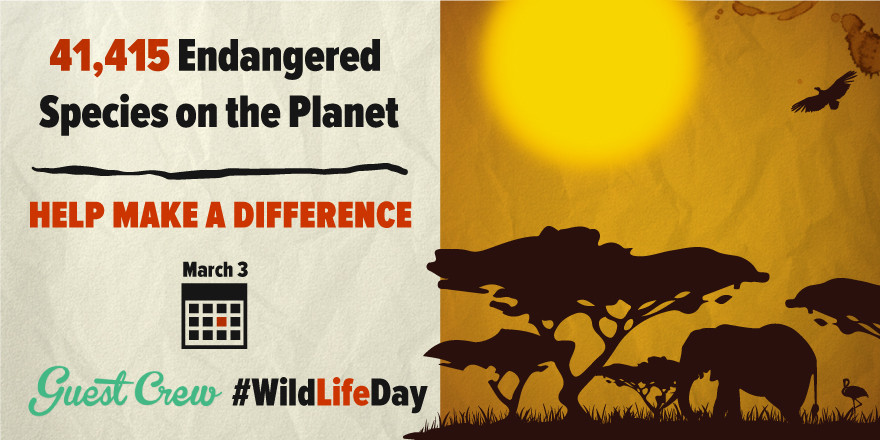 The beauty of the world around us is something we often take for granted.

How often do you stop to admire the deer grazing in the field on the way to work?

Or watch a bird hard at work building a nest to protect her young?

We share the planet with over 8.74 million species, and we often fail to think about how our actions can impact those who rely on us to protect them.

To remind us of our obligations to the wildlife of the world, March 3 has been declared the United Nations World Wildlife Day.

Where Are Animals Today?

There is not a corner of this planet that is not teeming with life of some sort. Marine animals swim in our oceans and rivers. Birds fly through the skies and tiny mammals make homes everywhere they can find space. While some animals are considered pests, others are magnificent species simply doing their best to get by.

Unfortunately, getting by in certain areas of the globe is more challenging than ever before.

Thanks to humans encroaching on the natural habitats of wildlife, there is simply less space for many animal species to make a home. Perhaps a bigger problem for larger species is the volume of animal trafficking that is occurring globally.

In an economic trickledown effect, the increase of fortunes in certain countries has increased the demand for certain raw materials that can only be gathered from living animals. Raw ivory, for example is valued at roughly three times what it was just four years ago. As prices rose with demand, the efforts of poachers increased along with them.

Today roughly 100 African elephants were slaughtered. Another 100 will be killed tomorrow. And another 100 the day after that.

Every day three rhinoceroses are killed. While far less than 100 daily, the slaughter of even one rhino can tip the scales for the entire species. Only 5 northern white rhinos remain in the world at all.  The West African black rhino is considered critically endangered, but is believed to be completely extinct. These tremendous animals are killed almost exclusively for their horns which are considered more valuable than drugs in some areas.

What You Can Do to Help

Elephants and rhinos are certainly not the only wildlife species in need of help. Of the 8.74 million species on the planet, 41,415 are endangered. Especially unfortunate is this: The number of endangered species is rising every year – not falling. We are not making a difference fast enough.

The United Nations has recognized the plight of all wild life and has created the World Wildlife Day Initiative to bring much-needed attention to the plight of the animals and to educate the world about what they can do to help stem the tide of extinctions and annihilations.

From simple social media campaigns and donation options to more complex requests, the United Nations World Wildlife Day will be here on March 3.

What are you going to do help make a difference?

Of the 8.74 million species on the planet, 41,415 are endangered. Especially unfortunate is this: The number of endangered species is rising every year – not falling. We are not making a difference fast enough. Support us on the Social Media and spread awareness