KICKSTARTER: How to Build A Successful App Business

Trending KICKSTARTER teaches you How to Build A Successful App Business

KICKSTARTER: How to Build A Successful App…

Contribute Now for KICKSTARTER: How to Build A Successful App Business Campaign 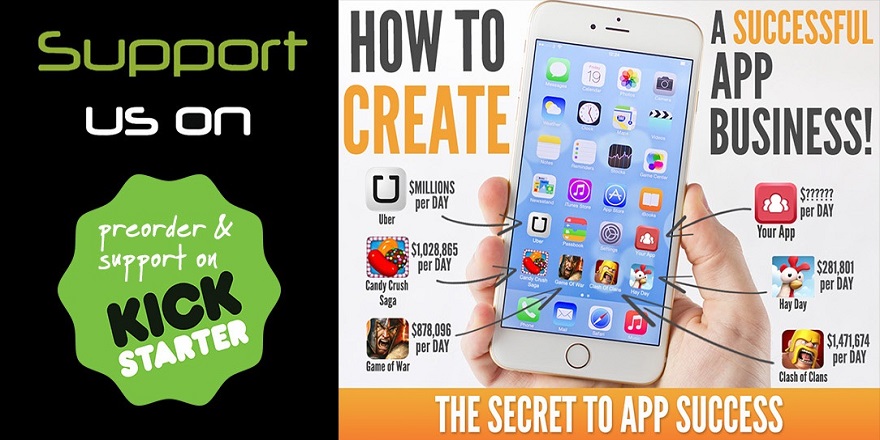 If you have ever even touched a smart-phone then you have probably used some of the most popular apps such as: Candy Crush, Game of War, Clash of Clans, Angry Birds, Flappy Bird, Evernote, Uber, Waze, etc.

Did you know that they generate millions of dollars per DAY?

Heck, you have probably even have had 1 or 2 app ideas of your own...

Ding! That’s where this course comes in.

No, it’s not ANOTHER course about programming apps. There are already way too many of those!

How To Create A Successful App Business and The Secret to App Success.

What I'm about to teach you are the tactics that my closest industry friends and I have used to generate over $10 million in the app industry.

Upon successful funding, the course will be finished and everything will be covered from how to generate your first app idea to cashing the checks.

The Secret to App Success will open up a whole new world of Apps that no one else is willing to teach you.

IMAGINE you were the owner of a blooming, highly profitable business centered around apps. Sounds pretty nice, right? Well it’s time to stop imagining and start doing something about it. That means you too, skipper.

What will be covered in the course?

What I will teach you are the skills you really need to build a successful app. Including the most important part, which is what you do AFTER you launch.

I'm building the course in a way so that just about anyone can follow along and do what we have successfully done. Even with absolutely no app, tech or business experience. I walk you through every step in extreme detail. My goal is for a 12 year old with absolutely no knowledge of any of this to be able to follow along.

Nobody is teaching this, because the real reasons behind app success are a set of highly guarded secrets that only a handful of people truly understand. Everyone else is running around shooting blindly from the hip, or spending completely obscene amounts of money on marketing.

Here's why the course is awesome

Here’s the problem with a lot of information out there on building apps... Most of the people doing this are struggling app developers, and not successful entrepreneurs.

That’s why most information you will find online will only teach you how to program the app. They stop once you put the app on the app stores and basically tell you "good luck!” But with millions of apps competing against you, you will need a lot more than luck. That’s where I come in.

The big benefits of contributing

This Kickstarter is so much more than a course on how to build a successful app business. It’s a way to learn entrepreneurship in this mobile driven world, and connect with other creators. It will also save you a lot of time (and money) in the long run. That’s time that can be better used for building your app empire.

And with this campaign being right around the holidays, it’s a perfect gift for anyone who wants to make money off of their app idea. Heck, I even have a method included to help you come up with your own app idea!

Lastly, if you contribute now you are essentially pre-ordering the course with a huge discount off of the future retail price of $299.

Depending on your reward level, you will have access to a private forum where you will be able to communicate with my team and me. You can also get get special access to the top people in the industry for unlimited assistance with any aspect of the app business.

What you are about to learn is going to transcend the app industry and unlock the secrets used by companies making large amounts of money while having a lot of fun and creating exciting, beneficial products.

Simply put, if you pre-order the course now, you could be saving hundreds of hours and lots of dollars.

It's ultimately your decision which reward level you want to select, which determines what you get access to.

Take the first step towards the Secrets to App Success by contributing (pre-ordering the course.) Make sure to check the Reward levels to get the best benefit for you.

What makes me a good teacher?

Who is this class for?

Do I have to attend this class at a particular time?

Nope! You can simply access the materials and consume them at your leisure. You will login to my private site to access it all.

I'm Brian D. Evans, a millennial with 12+ years experience as an entrepreneur that loves the app industry, which I have been involved with since it's inception. I also love marketing and technology.

I have worked, partnered with and consulted numerous companies on all sides of the industry. I've been involved in generated 10s of millions of users and millions of dollars in revenue for major apps, games and mobile campaigns.

I have traveled the globe building an incredible network of contacts, working with companies across the United States, Europe, China, Japan and Australia.

I have been fortunate to have access to all of the people I've met over the last decade. A personal goal of mine is to show gratitude by giving back and teaching the secrets and techniques that I've learned.

KICKSTARTER: How to Build A Successful App Business

Trending KICKSTARTER teaches you How to Build A Successful App Business