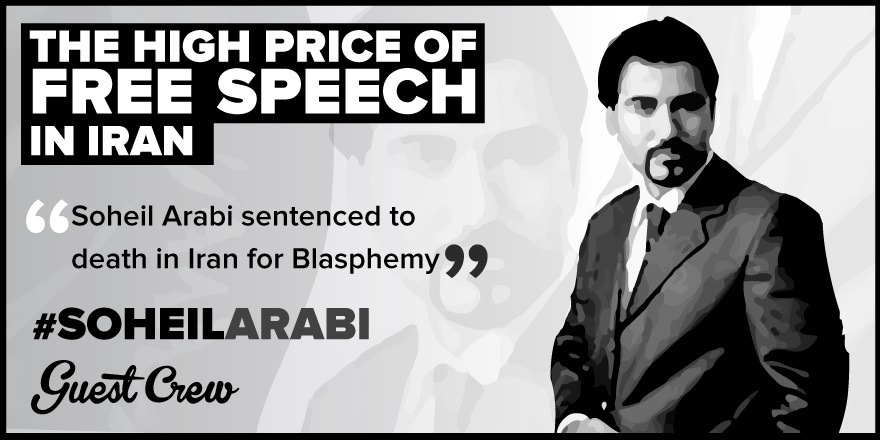 Social media users in the Middle East and around the world are faced with the stark reality that freedom of speech isn't free.

Sometimes, it comes with a very high price tag attached.

Amnesty International and other human rights advocacy groups are demanding the pardon and release of an Iranian man who was arrested and sentenced to death  after making “offensive” comments about the Islamic prophet Mohammad on social media.

Soheil Arabi, 30, was arrested by Iran's Revolutionary Guards Corps’ (IRGC)  in November of 2013 after acknowledging that he managed several Facebook pages where disparaging remarks about the Prophet were made.

Although Iranian officials never specified what the insults were and the Facebook pages have since been removed, Arabi was found guilty of “sabb al-nabi” (insulting the Prophet) on August 30, 2014 and was sentenced to death as a result.

Arabi's lawyers appealed his death sentence, citing Article 263 of the Islamic Penal Code, which states if a person insults the Prophet out of anger, by mistake or when quoting someone else, the death sentence would be overturned and 74 lashes given instead.

However, the appeal process did not result in the pardon Arabi's lawyers had hoped for. Instead, Arabi was sentenced to death for a second time for conviction on an additional charge of “corruption on Earth”, which was not included in the original indictment. The “corruption on Earth” conviction has no pardon or appeal process - and the execution is usually carried out rather quickly.

Presently, Arabi's lawyers are questioning the legality of the second conviction and death sentence while human rights groups around the world campaign to raise awareness about Arabi's case and Iran's long history of arbitrarily targeting social media users.

How Can You Help?

Guest Crew is a Crowd Speaking website where your social shares - facebook likes, tweets etc. are stored in the system and released all of it automatically on the due date of the campaign. Thus it will create a larger buzz on the social media and your messages will be heard over the Noise.

Encourage your friends, family and followers to do the same.

We are running this campaign for Soheil Arabi - a 30 year old from Iran. Arabi was found guilty of “sabb al-nabi” (insulting the Prophet) on August 30, 2014 and was sentenced to death as a result. Support this online petition via. Social Media. Click on the Facebook, twitter etc. buttons and let