Contribute Now for International Day of the Girl Child 2017 Campaign 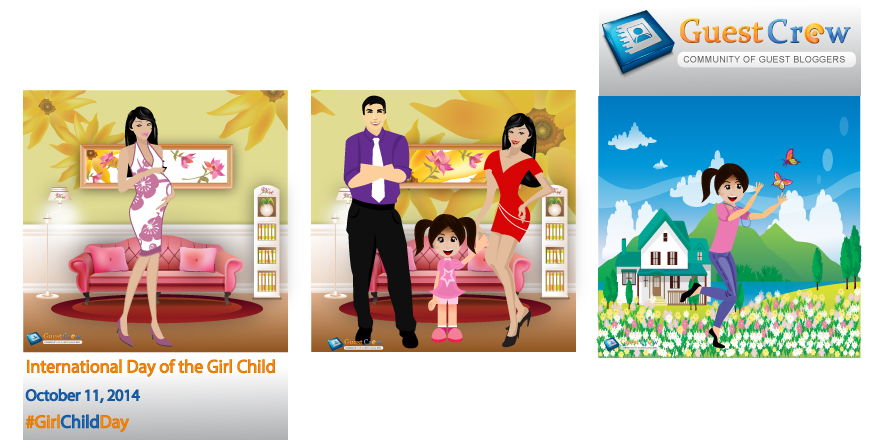 Many others say no.

And they would be right.

While the rights of girls in many countries are protected and ensured, this isn't true everywhere.

Girls are suffering in many ways.

Sometimes it’s the threat of violence.

Maybe it’s the complete denial of even a chance at life.

Lots of concerns leading up to one big problem.

And that needs to change.

In a single day, 25,000 girls under eighteen become brides. Some of these “brides” are as young as seven, and they have little or no say about their future. In countries like Niger, as many as 75 percent of marriages involve child brides – many who go on to become mothers themselves.

In these same developing countries as well as many others, birth control is often difficult to come by or, in some countries like the Philippines, banned completely. In a world of modernized medicine, it’s shocking to think that women still die in childbirth, but they do. In fact, 800 women – mostly teenagers - will die in childbirth today.

These dying mothers are young. In some cases very young.

In a developing country, half of all of the girls will become young mothers, regardless of child marriages. The dreams of a young teenage girl will be quickly cut short by pregnancy and then the demands of a young baby. Often these girls are mothers many times over by the time they would be old enough to vote in a Western society.

Progress is being made, but every day another 800 women die from something that should be easily preventable.

Even those who are not subject to a young marriage have obstacles they simply cannot overcome without help.

One in five girls in a developing country will never finish primary school. This is the statistic for those who are enrolled in a primary school. Many more never have the chance to even attempt education. Of those who make it through the early grades, the risks increase in secondary schools.

Only 30 percent of the girls in the world are enrolled in a secondary school program. Many face violence on their way to and from a school building. Ongoing unrest in many countries closes or prevents girls from reaching schools all together. Others face backlash from male groups opposing the education of women.

There are positive changes that have been shown when it comes to young girls in school. Awareness has risen and communities are working harder to find opportunities for schools. But that progress is limited. As fighting, wars and regime changes occur in developing countries, educational advancements often slow or stop.

This is especially frustrating as educating girls has many long term advantages. Educating one generation of young women increases the economic prospects of those women while also teaching the vital information about their own health and well-being.

In turn, a generation of educated women will continue to fight for the next generation, improving educational opportunities over time.

The issues girls face are not confirmed to corners of the globe. Many occur in the backyards of developed nations. Some girls are included in the 1.2 million children who are trafficked each year. Many of these children wind up in forced prostitution both in developed and developing countries.

Finally, a total of 250 million girls in their young teen years are living in poverty with almost no way to help themselves rise above their circumstances. These girls may not face major disasters like child marriages or forced prostitution, but poverty brings other problems.

Malnourishment. Decreased abilities. Poor health. A lack of hope for the future.

That’s what the goal is now. Increase awareness of the plight facing our young girls, and bring those girls hope.

International Day of the Girl Child

Just two years ago, the United Nations declared October 11th as the International Day of the Girl Child to raise awareness for the unique issues that adolescent girls face around the globe. Unlike other holiday that are simply that – holidays – this is not a day of recognition, it is a call to action.

The year the International Day of the Girl Child was founded, the United Nations targeted child brides and early weddings that put young girls at distinct disadvantages.  In 2013, the second year of the mission, the organization chose to bring awareness to the deficiencies in educational opportunities for young girls.

After only two years, awareness of these plights have grown tremendously, and in 2014, even more attention will be targeted on the issues that affect girls the most.

The day isn’t about a single mission or goal. While there may be a theme throughout the year, the International Day of the Girl Child is about making a change for millions of girls across the globe. Giving those girls a voice in the world and asking the rest of the global population to hear the needs these girls have and to take action to evoke change.

All humans have rights, and this is about the rights of girls.

It’s time to empower these girls to make changes - or make the changes the girls are powerless to make on their own.

It’s about doing the right thing.

There are many organizations working hard to spread the word about International Day of the Girl Child - including groups of school age girls from around the world. See the links below to learn more about what these groups are doing and what you can do to help.