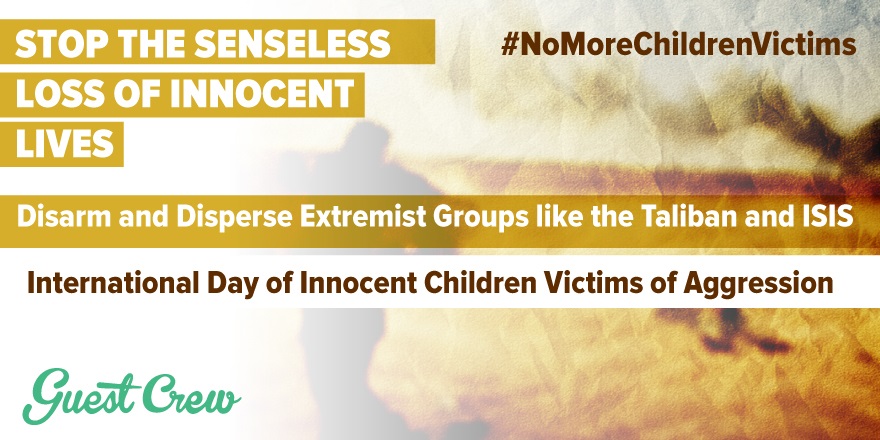 Tuesday's massacre of 132 school children in Pakistan by the Islamic extremists group the Taliban has  shed a global light on the dark reality of how innocent children all are losing their lives in wars that were never theirs to fight.

The victims of Tuesday's massacre, ranging in ages 5 to 17, were gunned down by Taliban militants while attending classes at Army Public School and Degree College in Pashwar as 'retribution'.

Being affiliated with a school that caters to the Pakistani army.

This week's incident isn't the only time children have become collateral damage between warring factions. Nearly 300 children were killed in Gaza when Israel launched an attack against the Palestinian Islamic group Hamas earlier in the year. A startling report by the United Nations (UN) estimated that more than 11,000 children were killed in Syria alone between 2011 and 2013 as a result of the Syrian Civil War.

Death isn't the only way that military and terrorist aggression is cutting short the lives of our children. ISIS, another militant Islamic group, is recruiting boys as young as 12 years old to fight alongside them and kidnapping young girls to be sold into sexual slavery or given as rewards to their soldiers.

Sadly, the loss of these innocent lives is often overshadowed by the political agendas of those involved, leaving survivors wondering what will become of them and whether anyone would even care at all.

In order to stop the senseless loss of innocent lives, more drastic steps must be taken to disarm and disperse extremist groups like the Taliban and ISIS. Extremist groups such as these are not only a Middle Eastern threat - they also pose significant national security risks in virtually every country around the globe, as demonstrated by an audio recording from ISIS that surfaced in September, calling for attacks against France, Canada and Australia and the 2001 bombing of the World Trade Center in New York City by,  yet another Islamic extremist group, al-Qaeda.

To raise awareness about child casualties of war and other global conflicts, the UN has designated June 4th to be International Day of Innocent Children Victims of Aggression. The purpose was clear:

"On this solemn occasion, we need to recall the sacred duty, enshrined in the United Nations Declaration of the Rights of the Child, to ensure that all children, without any exception whatsoever, enjoy special protection."

Join the campaign to commemorate International Day of Innocent Children Victims of Aggression this June 4th by speaking for those who can't speak for themselves and spreading the message that all children matter - regardless of color or creed.

Join the campaign to commemorate International Day of Innocent Children Victims of Aggression this June 4th by speaking for those who can't speak for themselves and spreading the message that all children matter - regardless of color or creed.