Demand full pardons for 49,000 men convicted for homosexuality in the UK #RememberAlanTuring 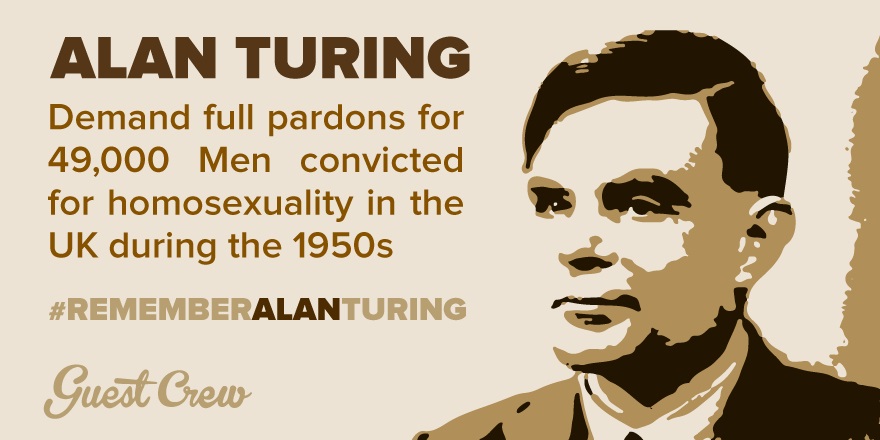 December 2014's release of the movie The Imitation Game has brought worldwide attention to the UK's archaic anti-homosexuality laws, under which 49,000 men were prosecuted in the 1950s for crimes of indecency.

The movie tells the story of Alan Turing -  a British computer scientist and mathematician who was hailed a hero for breaking the Enigma code used by German forces during World War II. Turing was awarded the OBE by King George IV for his wartime coding efforts in 1945 and made substantial contributions to the coding, computing and mathematics fields throughout the 1940s.

In 1952, Turing charged with “gross indecency” in accordance with Section 11 of the UK's Criminal Law Amendment Act 1885 as a result of a homosexual affair with a local man. Turing plead guilty at the advice of his counsel and was given the choice of prison or probation for his sentence. Turing chose probation, which included a condition of mandatory hormonal therapy to reduce libido. The therapy (injections of oestregen) rendered Turing impotent and resulted in other hormonal changes as well.

As a result of his conviction, Turing lost his security clearance and was barred from working with the government or military on intelligence coding projects. Turing fell into a deep depression and subsequently committed suicide two years later.

In 2009, then Prime Minister Gordon Brown issued an apology to Turing on the behalf of Parliament for his harsh treatment and tragedies that followed.

Those who lobbied for Turing's pardon say that, while they are pleased with the progress they have made, there's still more to do in order to completely right this wrong.

In addition to Turing, some 49,000 other men were convicted of homosexuality in the UK during the 1950s and each one of those deserves the same apology and pardon as Turing received – and then some.

The UK should publicly acknowledge and claim responsibility for the shame, pain and suffering these men had to endure as a result of these antiquated, intolerant laws.

We need to be the voice for those who cannot speak for themselves.

Demand full pardons of all the 49,000 men convicted for decency crimes in the UK under these archaic laws.

How Can you Help?

Guest Crew is a crowd speaking website where your social shares like facebook likes, tweets etc. are stored in the system. So if you use any of the social buttons available on this campaign page to support this campaign - your likes, tweets. etc. will be stored and released all of it along with everyone else's, automatically on the due date of the campaign. Thus making a huge buzz on the social media.

Demand full pardons for 49,000 men convicted for homosexuality in the UK

Demand full pardons for 49,000 men convicted for homosexuality in the UK #RememberAlanTuring